Satlantis and AGC, stars of the V Keicho Awards 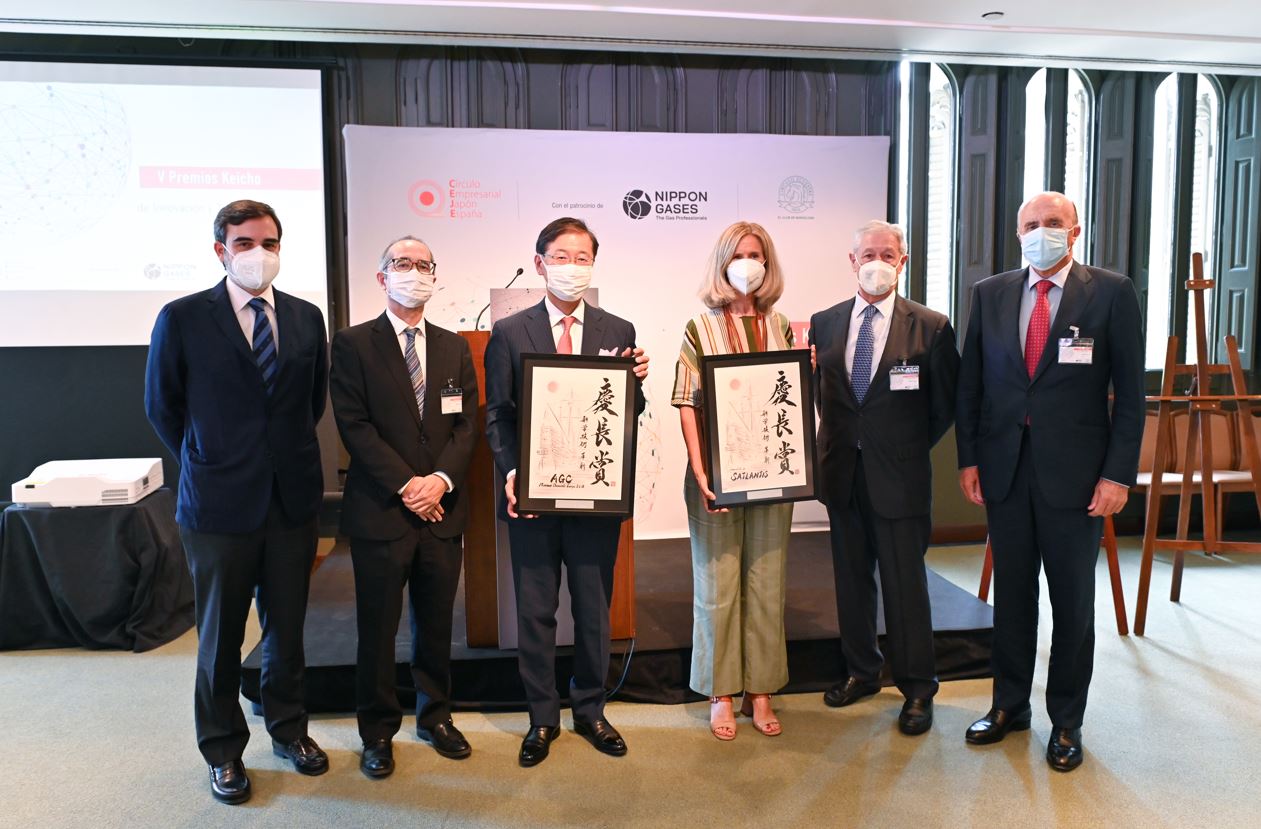 Satlantis and AGC, stars of the V Keicho Awards for Innovation and Technology of the Japan-Spain Business Circle

Barcelona, 6 July 2021.- The fifth edition of the Keicho Awards for Innovation and Technology, organised each year by the Japan-Spain Business Circle (CEJE) and held this year in collaboration with the Círculo Ecuestre de Barcelona, awarded the Spanish company, SATLANTIS, for the development of the first miniature optical camera for Earth observation, with the collaboration of the Japanese Aerospace Exploration Agency (JAXA). The technology SME, based in Getxo, installed this camera in the Japanese space module of the International Space Station. The second award went to AGC Pharma Chemicals Europe, the AGC Groupcompany dedicated to synthetic medicine, for the installation of an R&D centre and the expansion of its European base for the manufacture of active pharmaceutical ingredients, located in Malgrat de Mar, Barcelona.

At the awards ceremony, Jorge Lasheras, President of the Japan-Spain Business Circle, emphasised that the Keicho Awards serve to recognise the work carried out by these companies in developing economic relations between Japan and Spain. The President of the Japan-Spain Business Circle also said that “both trade and investment flows have developed very positively in the last decade, but given Spain’s weight in the European Union, our role with Japan should increase, and the potential for improvement is very significant”.

For her part, the Honorary President and Founder of SATLANTIS, Cristina Garmendia, stated that “thanks to the new camera installed in the International Space Station, we can see our planet’s emissions in real time, where it is being polluted and where this pollution is coming from. It is a paradigm shift. We will see the phytoplankton that emerges, deforestation, and many more phenomena on the face of the Earth. We have created a technological capacity that was essential in order to advance as a society”.  Garmendia, expressing her gratitude on behalf of the entire company for being recognised with the award, said “we were a start-up, an SME made up of young people, and it was Japan who bet on us and it was the first time they had installed non-Japanese technology in their Space Station module”. She also announced four upcoming projects. In December, SATLANTIS will carry out another launch to the International Space Station in collaboration with NASA. Another mission, Urdaneta, will be launched in March 2022. This will be followed by MANTIS, in collaboration with the European Space Agency, for the Oil & Gas sector, and the GEI-SAT mission in 2023, with the aim of detecting and quantifying methane emissions.

Finally, Akihiro Kadokura, Director of AGC Pharma Chemicals Europe, explained that “since 2016, the Group has been acquiring leading companies in the biopharmaceutical field, to establish a global trilateral system covering Japan, Europe and the United States. And this resulted in us acquiring the Spanish company Malgrat Pharma Chemicals, the former Boehringer Ingelheim plant, in March 2019, and was the first acquisition in the field of synthetic pharmaceutical chemicals”. With regard to the expansion of the Malgrat de Mar centre, the project for which the award was received, Kadokura said that “as the active pharmaceutical ingredient market (API) is growing at a pace of 5-6% annually, to meet this accelerated demand, AGC is expanding the production capacity of its plant at Malgrat de Mar, creating a new micronisation facility. This plant is expected to be operational in December 2021. Our company is also accelerating the digitalisation of the plant, including the introduction of electronic batch recording”.

The Keicho Awards, which celebrated their fifth edition this year, were created with the aim of giving visibility to companies and figures that promote collaboration between Spain and Japan. Strictly honorary in nature, these awards are given to two companies, one Spanish and one Japanese, with professional track records defined by innovation and the incorporation of technologies into structural sectors of society.

Since the first edition in 2016, these awards have recognised the Spanish chef, Carme Ruscalleda and companies like Nikken Sekkei, Panasonic, Gestamp, Fujifilm, Uriach, Iberia and Nissan, among others.

You can find out more about which cookies we are using or switch them off in settings.

This website uses cookies so that we can provide you with the best user experience possible. Cookie information is stored in your browser and performs functions such as recognising you when you return to our website and helping our team to understand which sections of the website you find most interesting and useful.

Strictly Necessary Cookie should be enabled at all times so that we can save your preferences for cookie settings.

If you disable this cookie, we will not be able to save your preferences. This means that every time you visit this website you will need to enable or disable cookies again.

These cookies are used to know the preferences of users in order to improve the offer of our services. Keeping this cookie enabled helps us to improve our website.

Please enable Strictly Necessary Cookies first so that we can save your preferences!

Marketing cookies may be set by our advertising partners to collect information about your browsing habits. Keeping these cookies enables us to display advertisements that are more relevant to you and your interests.

Please enable Strictly Necessary Cookies first so that we can save your preferences!